We have returned to in-person Sunday services at the church, starting on Sunday, March 6th at 10:30 am.

The Saturday and Sunday community breakfasts at St Stephen's continue to operate as takeaway, in compliance with directions from the Ontario Ministry of Health.

Welcome to the St. Stephen’s Community 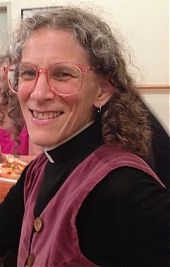 We are an inclusive and affirming Anglican community in the heart of the city, where we strive to live out God’s mission of compassion and justice for all people, and for all of creation.

We are committed to being a community of solidarity with those who have been pushed to the margins of our society, and to the task of building a better world.

We support and engage with the arts—music, literature, theatre, the visual arts—and welcome collaboration with working artists.

We encourage questioning, dialogue, exploration and doubt. We know that the mystery of God is too great for any of us to understand fully, but together, through worship, work and community, we can continue to grow, to learn, and to move deeper into our shared life in God’s love. We welcome diversity of sexual orientation, gender expression, and gender identity.

Please join us for one of our worship services or community activities! We look forward to meeting you.

Please let us know if there are people for whom you want us to pray or special concerns you may have.

Feast of Saint Mary the Virgin

Here is the leaflet for the St Stephen-in-the-Fields online service for St Mary the Virgin (7:00pm, 13 August 2022), complete with music where needed. To open the PDF leaflet, right-click here and select option: ‘open link in new tab’ (or, use any equivalent wording, depending on your browser type)


He was not part of the original group of disciples, our patron Stephen; there’s no indication that he ever met Jesus face to face. And he had a Greek name, Stephanos. He was not a Palestinian Jew, like Peter and James and John and the rest; he was part of the Jewish diaspora, maybe born far away from Palestine, maybe someone who dressed differently, spoke differently, possibly had Greek as his first language rather than the Aramaic which Jesus and the disciples spoke. He was not alone—the early church had clearly attracted a good number others from the diaspora, because the initial conflict which brought Stephen into prominence was about the “Greek widows”, the vulnerable elders of this somewhat marginal group, and the sense by others from their community that they were being neglected.

The establishment of the order of deacons, as described in the book of Acts, was the attempt to find a solution to this problem in the community, and it is fascinating to me because it marks the exact moment when you can see the early church starting to go off-track, the moment when the original apostles decide that they are too busy and important to pursue work of simple and humble service, of diakonia, which Christ himself had specifically named as his life’s work, and set up the order of deacons to take care of the “outsiders” for them, while they studied and prayed and, to be frank, kept within the group with which they were familiar and comfortable.

That call to diakonia, to service, to the margins, has always been part of the charism of this parish, and I have spoken about that often enough before. We have seen it again, in the crisis of this last eighteen months when it became instantly clear that our drop-ins and our breakfasts would continue, that people from the parish would continue to come out and serve if they were able, to support in other ways if that wasn’t possible for them. When many other meal and drop-in programmes around the city were choosing to shut down for longer or shorter times, this little poor scrappy church kept going, at one point running one of only five open drop-ins in the whole city of Toronto—and it is all of you, in your various ways, who have done this, who have lived out Stephen’s calling at a moment when you might have chosen otherwise. Or perhaps none of us really could have chosen otherwise; perhaps the story chose us. For Stephen is also the church’s first great storyteller. Peter, throughout the early chapters of Acts, is rummaging in the prophets and the psalms to find ways of explaining what has happened, to put this overwhelming new experience into words. But none of his efforts come close to the comprehensive and exhaustive narrative which Stephen produces before his death, which takes up an entire long chapter of the book of Acts, and of which only a small part is reproduced here—Stephen goes right back to the beginning of the story of the covenant, that one story which all Jews everywhere knew as their origin, the calling of Abram away from his home, and marches his hearers right through the entire history of Israel up to that point, shaping it all into a story which points to this moment, this time and place, the events which are both the final meaning towards which all the narrative tends, and the only point from which the story can be properly understood, the blaze of resurrection light which consumes even the darkness of his own impending death.

And that death itself is a complex one, a sort of exemplar of lateral violence, the oppressed turning on the oppressed. Jesus was murdered by, first and foremost, Roman imperial violence, aided by some of the religious elite among his own colonized people. But here it is violence within the colonized community itself, the already occupied people turning on one of their own—and yet not quite one of their own, just strange enough, just foreign enough, to be the scapegoat, to be that object of violence which would begin to sever the community, to create divisions which have not yet healed—and across which the violence has often been directed the other way, as the long history of Christian pogroms and anti-Semitism shows.

And at this moment, Stephen, the strange one, the misfit, the slightly inferior, Stephen the deacon, Stephen the storyteller, simply stands and keeps on saying his truth, because that is all he can do. And he dies, unresisting, without anger or judgement, just telling that story until he can speak no longer.

The prophets, the difficult ones who say complicated things, who compel us to see how often we betray all that is best in ourselves and our histories, are always unwelcome, will always become the lightning rods for violence. And more often than not, that prophetic voice, and the willingness to risk which it requires, emerges from difference, from those who in some way have already been partly on the outside. If we are to claim any bit of the courage of those prophets, maybe it begins with claiming our own difference, the strength of our own strangeness, whatever, for each of us, it may be.

We are living in very difficult times, in a world which seems smaller and meaner and more cruel every day, and the prospects for our society and our planet are ever more frightening. We need to know another story. Like Stephen, we need to take that story, of the God who came to led a nameless group of slaves out of empire, of the same God who came as a refugee child among the poor and died for love at the hands of power, and make it our own. We need to make it ours through our work for all those who suffer, through the service which carries no prestige or special honour. We need to make it ours through our acknowledgement of our own difference and vulnerability. We need to make it ours enough that we can tell it, tell it in the face of anger, tell it in the face of power, keep telling it, even if it seems that no one is listening. It will cost us—maybe not exactly the way it cost Stephen, but in some way, it will. But this is our calling, pointless as it may, on some days, seem.

It could have seemed that way to Stephen, certainly, as he died unheeded, the people around him even covering their ears to avoid hearing. But we are given another important detail; that one of those present at his death, not actively involved perhaps but certainly consenting and supporting, was a young man named Saul. As far as lateral violence goes, Saul was in an obvious position to deploy what privilege he had, and he did have privilege. He was both a Jew, apparently in favour both with the Philistines and with the Temple elite, and a Roman citizen, a status not shared by many. Highly educated, multilingual, in with the best circles among his own occupied community but also with the safety and privilege available through his connection to Rome. Stephen’s death did not change Saul right away; indeed, he seems to have swung into a full-scale campaign of violence afterwards, perhaps trying to justify what he had been involved in by doing it over and over. But then, some unclear time later, he fell on the Damascus Road in the face of a light no one else could see, and nothing after that could be the same.

And it was Stephen, his pointless final stand, his unheeded story, which led towards Damascus, which meant that Saul who became Paul never forgot his complicity in this first murder, but also, and despite his own complexities and confusions, never forgot what he had seen that day—the vision of human possibility, what we can endure when we know we are loved, what we can forgive when we know we are forgiven. What we can change, even if never knowing it, never seeing it, when we allow ourselves to be changed. 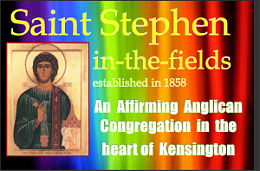 Have you thought of pre-authorized giving? Contact our parish administrator, Janet Nichols.