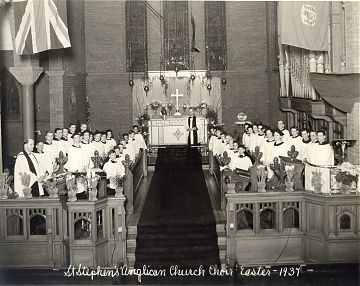 The original 1858 interior was plain, neat and comfortable. The nave, built to accommodate four hundred people, was 72 feet long by 34 feet wide. The main entrance was on the west through a small porch and one entrance was at the northeast corner of the nave. The chancel was not overly large, being 36 feet by 20. There was a door on the south side of the chancel, by which the clergy entered from the vestry.

The roof was of one span; the curved ribs and other timbers were stained and varnished. And although it cannot be substantiated, there is a story that Canon Ward’s grandfather had a hand in the staining. Thomas Fuller designed all arrangements in the strictest Ecclesiastical tradition. The acoustics were excellent and its economical heating was favourably received. It has been noted that only two stoves were necessary when the temperature outside was 55 to 60 degrees (Fahrenheit).

“Glass typical of the period from the 1860s to the 1880s is preserved in the North Transept of St. Stephen-in-the-Fields at 103 Bellevue Avenue on the South side of College Street. St. Stephen’s, originally built in 1858 to designs by Thomas Fuller, was rebuilt in 1865 by Gundry and Langley after a fire. According to Patricia McHugh, the transepts were added in 1878, but the glass in this triple lancet of the North transept perpetuates the type of stencilled quarry glass with emblems which had already existed in Toronto from the late 1850s and 1860s. The triple lancet on the North wall of the transept contains stencilled quarry glass with patterns of trefoil leaves and beaded borders, and diagonal bands of stencilled texts from Scripture. It also contains emblems such as the chalice with grapes and wheat symbolic of the wine and break of the Eucharist.

St. Stephen’s contains an impressive East window in the chancel typical of the work of N.T. Lyon of the 1880s-1890s, and a West window of 1912 by McCausland related in style and subject to the West window at All Saints’ Church, Sherbourne and Dundas Streets.”